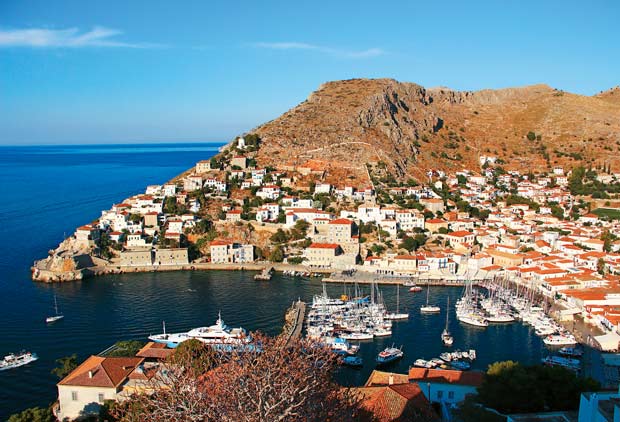 There are ten piers in Athens, Greece, with more than a thousand ships berthed. In June of this year, a group of 23 sailing groups consisting of captain Luo Zhiyuan, coach Zhuo Yujian, trainees Chen Yiqun, Hong Jinwei, etc., transferred from Taiwan via Istanbul, Turkey, and then arrived at Alimos Port in Athens, the capital of Greece. ). I rented three boats locally and prepared food and daily necessities for seven days on board, so that I could travel around the Greek Islands and realize my dream of waking up in Qianfan.

Self-driving sailboats, at first glance, people often think that they require extremely high physical strength and skills. Luo Zhiyuan, an examination officer of the Water Life Saving Association of the Republic of China, said that sailing is the origin of modern yachts and there are many types. From a boat without a keel (Dinghy), you can enjoy the fun of water; a very exciting racing boat (Racer), pursuing technical excellence and teamwork; all the way to a cruise ship (Cruiser) that can travel around the world, suitable for enjoying with friends and family A pleasant ocean holiday is like a mobile villa, with kitchen, bathroom and bed. But no matter what kind of sailboat, it needs professional technical learning before it can sail in the wind.

Before departure, Luo Zhiyuan took into account the characteristics of the members of the group. Although most of them have more than half a year of learning sailing experience, some members bring their companions to participate in a special two-day and one-night pre-departure course to let the students know that they may encounter The problem. For example, “Mediterranean-style berthing” is a method of berthing in the stern of the harbour. However, due to the small number of berthed ships in Taiwan, most of them use left-hand (left hull) or right-hand berthing.

In addition, planning your own nautical chart is also an indispensable designated item before departure. Although most of the ships with modern equipment are equipped with maritime GPS, Luo Zhiyuan insists on teaching students that they must learn to make their own nautical charts, and then compare the electronic charts (onboard GPS), because it is very important to distinguish the direction at sea. He said, “Navigation is philosophical. You must first position yourself and know where you are now before you know where you are going.”

On the first night, the members made a simple dinner on the boat and went to bed early after watching the sunset.

The next morning, set off and set off. Against the background of the blue sea and blue sky, the team members focused on their respective positions, and under the guidance of the captain, the sails were actually operated and sailed smoothly. When the wind was taking the boat to sail, and at this moment when it quieted down, many members experienced a rhythm where only the waves were beating against the hull of the boat, and the wind gently and warmly brushed their faces.

Looking at the land farther and farther away, Hong Jin laughed and said, “It feels like finding the soul.” Watching the sunrise on the sea is completely different from that on the flat land, making him realize that “the sea can speak.” This unprecedented but familiar feeling made him fall in love when he sailed out to sea for the first time.

Luo Zhiyuan sighed, “The feeling of escaping from daily life is very touching and difficult to describe.” When three ships left the land with more than a dozen other ships from various countries in the morning, they were cut off from daily life and rushed towards each other spontaneously. The sense of companionship of the sea.

At noon, take a rest on the small island on the side of Methanon, leave after dinner, and stay at Poros in the evening. Facing the European continent, Poros Island used to be an important maritime transportation hub, with military key bunkers. Many people still travel between the two places in small boats. It is a good spot for locals on a day trip.

It rained the next morning. Starting from Poros, dark clouds followed all the way, the waves were very bad, and the boat was very bumpy. When encountering bad weather or seasickness, Zhuo Yujia suggested that the group members take the seasickness medicine on their own initiative. As far as team safety is concerned, as soon as seasickness becomes an invalid sailor, he can only enter the cabin to rest.

In the afternoon, we arrived at Spetses, a small private island purchased by Stavros Niarchos, the second Greek ship king, when the Greek shipbuilding industry developed in the 1950s and 1960s. (Spetsopoula) And glorious, back then, it was one of the honeymoon places of Prince Charles and Princess Diana of England.

Simon LeBon, a member of the popular band “Duran Duran” in the 1980s, also held a birthday party here. Although there are only a few thousand residents on the island, there are still a few four- and five-star hotels. It can be seen that the old time is glorious, and the leisurely and slow roads are shuttled by horse-drawn carriages.

The difficulty is coming. On this day, no berth was found in the port, so three ships were anchored in the port, and everyone took turns to take the boat to the island.

The next day, in order to see the special St. John’s Day event on the neighboring island of Ermioni, unmarried men and women in costumes were dancing around the fire late at night. Although none of the group members understand Greek, slowing down and experiencing exotic cultures is also one of the joys of traveling.

Hydra, a must-visit island in this trip, has a special significance in Greek culture and history. It has not only been known for its tranquility and beauty since the 18th century, attracting many writers and artists to gather. In recent years, the island’s citizens have decided not to let cars be allowed. The locomotives and other civilizations are stationed. So far, the only means of transportation on Idra Island is the donkey responsible for carrying goods, and the only vehicle is the garbage truck. The distinctive islanders impress travelers and make the island very popular.

For this reason, the group of people who entered the port before nine o’clock in the morning was still frightened to grab the boat’s space. “The grab was fierce! There is no priority for women,” Zhuo Yuyi said with a smile, and finally resorted to Taiwan’s parking coup. , “First send out the boat to observe the situation, take a good space, report back with the walkie-talkie, and then rush in to grab the space.”

However, after a while, they discovered that the boat was mooring in the port of Idra, just as if it was temporarily stopped in Taipei, the boat was like a semicircle, and it continued to expand outward.

On a calm sea level, the group members chat and drink wine leisurely. During a lot of time in a daze, they can really slow down and feel everything around them. “I think this can only be done on a boat, and this is travel. The real purpose of this,” said Hong Jinwei.

Ride the wind and visit the dream scene

Many small islands in Greece are right next to the shopping street, wherever you can find food, you can live very easily. One day when I went to Aigina, I didn’t have time to visit the temple of the goddess on the island, so I just decided to swim by the sea temporarily. It felt like a “dream scene”.

Four essential features of One Piece

It’s the first time to travel on a heavy sailing boat in Greece. It has been a long time for them to see sailing tourism as a leisure activity. I often see old couples in their 70s and 80s traveling on a sailing boat. Happy!

I have studied self-driving sailing for half a year. I think this is a very connotative sport. I think there are four characteristics in order to enjoy sailing.

First, you must have the character of an artist, otherwise you will not be able to do anything at sea, and you will have to compromise with the climate and tides. Some factors cannot be controlled in the plan.

Second, for safety and team considerations, there must also be philosophers’ thinking and choosing between different values. For example, if you go straight and go downwind, or go in a zigzag crosswind, you must make different choices according to the prevailing conditions. The third thing you need to have is the skills of a sportsman. In addition to basic skills in boating, it is more helpful to have a better understanding of the ocean, weather, and tides. The fourth is the spirit of an adventurer, you won’t just look forward to a smooth sailing every day!

As the commander-in-chief of this trip, one of the main minds of itinerary planning, Luo Zhiyuan and sailing actually originated from an unexpected experience, “I have liked to play in the water since I was a child, but sailing has not appeared in my life options for the past 40 years. It’s only one experience, and it completely changed my life,” he said.

In his life, he went from civil engineering at Jiaotong University to graduated with a Ph.D. in civil engineering at National Chengchi University, but he became a teacher when he was seeking a “Water Sports and Leisure Department” at Shinri University. It was not until 2007 that I bought a 28-foot Lohas after experiencing a sailing accident and started sailing around the island, which encountered many difficulties. The following year, I discovered that Hong Kong had a complete set of “American Sailing Association” (ASA) courses. Only after finishing the courses did I know that the international has already had such sailing trips.

The American Nautical Association certification course is systematically re-implemented. The self-driving sailing this time is about the “sailboat leasing” part of the system. Luo Zhiyuan believes that instead of discussing it in class, it is better to turn it into practical operation and let the students experience directly. The relevant implementation of foreign chartering, therefore planning this self-driving tour.

After introducing the courses, he also found that Taiwan’s special geographical location, plus Penghu has more than 100 small islands, is still undeveloped. Like Greece, Spain, Croatia and other countries, it has the conditions for the development of sailing leisure sports. After several years of promotion, he understood that in many leisure sports, we have been cultivating “consumers” and neglected to educate and cultivate true “producers” in order to drive the development of the entire industry. So he started to promote the “Youth Sailing Project”, hoping to cultivate seed sailing talents in a nearly free way.

During this self-driving tour of the Mediterranean Sea, Luo Zhiyuan believes that the local area has a profound sailing culture. In history, each island is a city-state. Sailing is a tool to lead you to experience, suitable for beginners. He joked that before he was ready to set off, everyone said it was difficult to find a long vacation. After the actual experience, most people feel that a week is too short.

“Our hearts are still at sea,” he said. And this is what he thinks is the most difficult part of promoting sailing. “When a person gets on a boat, the sails are raised, and the wind takes you on the sea level. The kind of comfort and calmness cannot be expressed in appropriate words.

Subscribe to the World Daily Newspaper (sent every Monday to Friday)

The world editor’s selection of 10 domestic and international news, sent every morning, you can also listen to the voice reading

Featured 10 news, sent in the morning